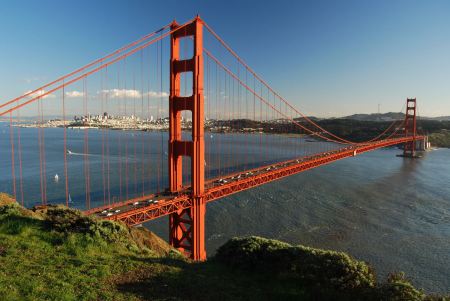 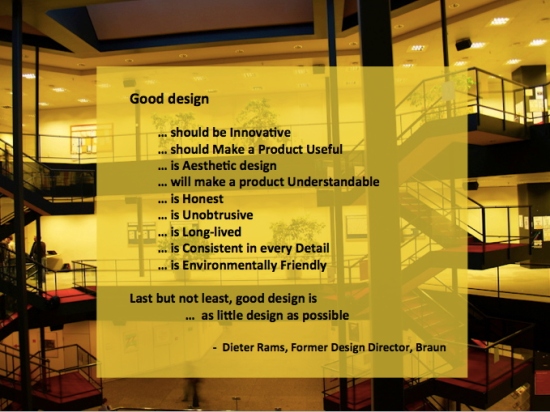 I recently saw a terrific documentary, “Objectified“, by Gary Huswit which is all about how things are designed and how design affects us.  (Available on Netflix — I highly recommend it for various reasons.)   When I heard the list of characteristics of Good Design put forth by Dieter Rams, it struck me that many of the elements of great design apply to management.

… should be Innovative.  In the case of management, it is not about a stream of new programs, but it is about being open to innovation and ensuring differentiation.

… should Make a Product Useful.  I think the important analogy here is that great management should maximize employee “usefulness” by enabling them to be engaged and productive.

… is Aesthetic design.   Just as a product’s look and feel feed our emotions and sense of value, a management system needs to be made visible and felt.  In fact, it is always visible and felt, but those impressions are not always the ones that management intends! 🙂

… will make a product Understandable.  It should be easy for people to understand how to get their jobs done, how the customer experience gets formed, and how to get decisions made.

… is Unobtrusive.  It should feel like the system is serving the people, not the other way around.

… is Long-lived.  Things have to change super-fast, but every company has to build some fundamental principles that endure.

… is Consistent in every detail:  Well, there is a part of me that immediately rebels, with Emerson’s “a foolish consistency is the hobgoblin of little minds” as my shield.  But we’ve all experienced companies with big service messages that have rude representatives, or a great new product with no training for the sales force.  So yes, great management means focus for a critical mass of consistent implementation.

… is Environmentally Friendly:  Sustainability is no longer a matter of choice and it is definitely not a marketing message.  It is an inescapable set of forces that affect every business in the form of cost changes, voluntary and uncontrolled transparency, customer expectations and regulatory actions.

“Last but not least, good [management] is… as little [management] as possible.”  Whether we call it the self-organizing organization or the generative company, it is all about winning through “just enough” leadership and highly engaged employees. (See “Use the Force, Luke” post, April 2.)

The design world clearly offers a lot of catalysts for Affective Action.  I’m intrigued.  Are there other design principles or practices that you think can be used in management?

If you had to choose two key rules to live by and a classic movie star to have on a desert island with you, what/who would you choose?

May I suggest the Golden Rule, this one, and William Holden?  Regardless of what island, company or planet you inhabit, this post will help you change that world for the better.

There are 4 “modes” of communication. Whenever we communicate we are doing so in one or more of the following :

Each has a different impact. If you learn those impacts and apply each mode correctly you can exceed your objectives dramatically with much less effort.

The Impact and Application of the Four Modes of Communication

1.  The mode of Complaint

2.  The mode of Information

3.  The mode of Creation

4. The mode of Inspiration

Putting it to Work

I’ve read and forgotten a boatload of teamwork/management stuff over the years and, in contrast, this 4 part communication rule has stayed with me.  It is the pasta of this space — easy, flexible and always hits the spot.  Here are a few application insights:

Input Welcome:  Do you think this model is useful?  Do you have other ideas for how to apply or improve on it?

Attribution: If I knew who originally came up with this modeI I would give full credit and send many accolades!  I was exposed to this at a company-wide management course at Agilent. Please write in if you know the source.

View this document on Scribd

Businesses and the people in them share a tension:  They want to succeed and feel woefully short of the time and money to do so.  They are so wound up, they hesitate to even imagine what they could do if they had access to a deep well of additional resources.  That source exists, though it is regularly ignored, avoided and underestimated.  It is the emotional motivation and energy of employees.

There is an immense quantifiable opportunity to create healthier, more successful businesses through affective action: Winning by engaging the hearts and spirits of employees, not just their hands and heads.

WHY EXECUTIVES SHOULD CARE – A LOT

No other opportunity that can match the return on this.

The growing body of studies on just the value of employee engagement shows staggering numbers*:

All that money is just sitting there or, more accurately, blowing away. And it costs nothing to harvest it. In fact you save money while doing so.

In addition, unlike technology-based growth and profit drivers, this one is accessible to every organization and industry.

The Stick: Industrial Age model crashes and burns in the Information Age.

It has probably been over 10 years ago that I heard Gary Hamel note that the prevailing management models are based all too closely on the control systems set up for factories in the Industrial Revolution.  At this point I know you are off checking Wikipedia, so I’ll wait.  …Oh good, you’re back.  As you now know, this means that we are using 200-year-old models in the Information Age.  This must stop.  Industrial workers were often treated as extensions of machines and that control-oriented management migrated to offices as well.  Business management theory progressed — and became an industry in itself; but even so it usually still bears hallmarks of the factories of the 19th century:

In the Information Age, a management system in which small numbers of people direct large numbers of people to perform repetitive tasks in an ever more solidified strategy/infrastructure will surely fail.  What we need are systems in which all employees actively regenerate parts of the business as needed or opportune.

WHY EMPLOYEES SHOULD CARE

You do what a friend of mine calls “your highest and best work” in a work environment where you:

Anything short of this is underutilizing you and your time.  Happily, individuals can help create these conditions for themselves and others.

USING “THE FORCE” OF AFFECTIVE ACTION

Future posts will explore useful tactics that individuals and managers use to create inspiring, engaging and generative work environments.  By “generative” I mean naturally generating and exploiting a stream of innovations that propel the company forward successfully in the face of continuous change.

This topic is not entirely new or isolated.  As Figure 1 illustrates, it overlaps and complements several established management and individual development topics.  Many articles and books offer rich and valuable advice on those topics.

On this site I want to focus on going beyond improving within current norms.  We need to create and thrive with new models that match the possibilities of the 21st century.

Imagine what would be possible in a workplace if:

The dynamism demanded by the information age won’t come from extracting more bursts of brilliance and superhuman effort in the old model.  Luke Skywalker tapped into The Force.  We can tap into Affective Action, creating new, generative organizations by helping people find deep personal connections to their work and each other.

* Source: These are extracts of statistics from ”99 Incredible Employee Engagement Statistics“, a very interesting document put together and made available by a company named Beyond Morale (beyondmorale.com).